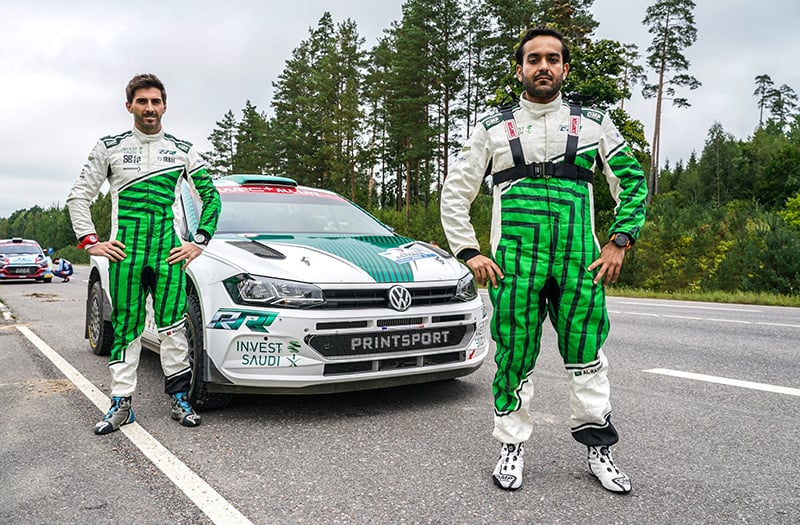 We catch up with Rakan ‘Flat Out’ Al-Rashed, the only Saudi driver currently in the World Rally Cross Championship to tell us about what it takes to be a rally driver at the top of his game!

Well known for his high-speed skill and agility on the WRC course, we slowed things down for just a moment to get some insight into the world of a professional Saudi rally driver.

31 year old Rakan is a multi-talented individual with success in both the business world, being a board member of Hwadi Group and co-founder of new $25m Abu Dhabi Venture Fund, Access Bridge Ventures, which invests in early stage businesses across the Middle East, North Africa and Pakistan. He also achieves stellar success in the sporting world as a WRC driver, competing at world-renowned championships such as the Middle East Championship (most notably achieving 3rd place in 2016), the European Championship, the World Championship (final round – 9th place professional) and the list goes on.

Tell us what it is about racing on snow/ice that makes it your favourite? “I think what makes it special is the challenging conditions… The cold weather, the driving surface and how it affects the driving style, and also ice events mean driving at night which makes it really special and challenging! You can see just the next corner and nothing else and when you’re going sideways you don’t know if you will hit something or not. Quick reactions are really important in icy conditions because most of the time you’ll be hitting snow banks and if you don’t have quick reactions you’ll be stuck in them. They say in snow events if you don’t lose any bumpers you aren’t driving fast enough!”

Your car branding and colour scheme are really unique, you often include your company logos and pay homage to your country brilliantly with the colour scheme…is this something you’re passionate about and take a personal interest in? “Yeah, one of our messages driving internationally in Europe is first to get experience from top events and top drivers while we learn from them and try to be the best at the sport and at the same time to promote our country, to promote Saudi Arabia, especially now that Saudi Arabia is opening up for tourism and business.” 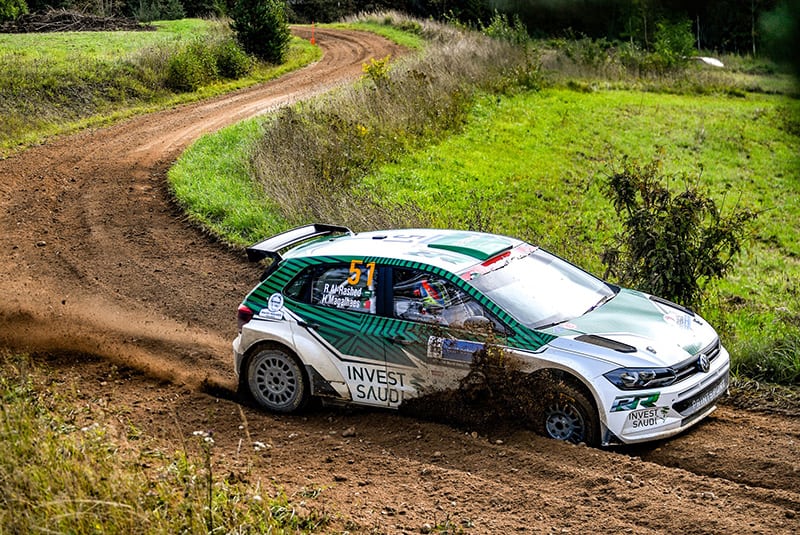 What is the most dangerous rally you’ve taken part in and what made it so dangerous? “Ummm, I think each rally has its own dangers but I think Cyprus is maybe one of the most dangerous because there are big cliffs, 100 and 200m cliffs to navigate, if you miss the corner then it’s bye-bye!”

You’re obviously successful and hugely talented behind the wheel of a rally car, but also as a well-established businessman. What qualities do you possess that you believe contribute to your successes in both? “There are a lot of things shared between sport and business, I think one of the most important things is the drive to succeed, the confidence and the element of not being afraid of failure. It’s not every day that you win and you need to get used to being disappointed, it’s part of sport and it’s part of business and you need to learn to move on from it quickly.” 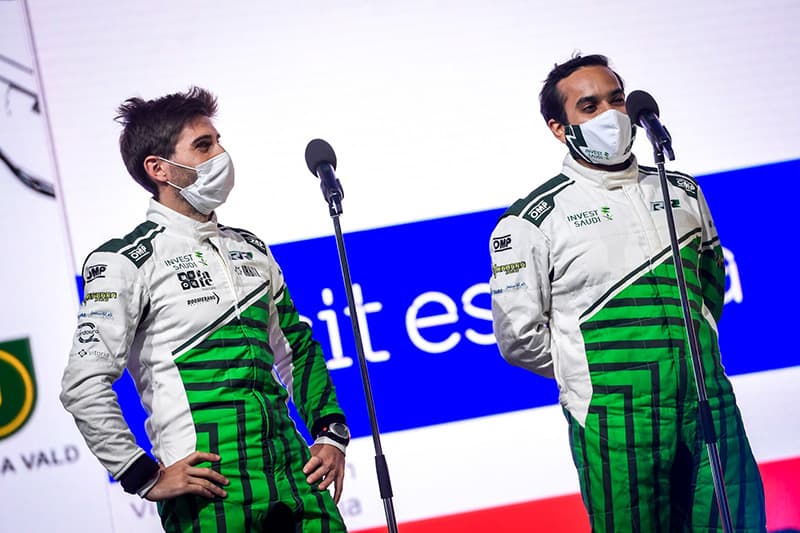 Ever forget you aren’t on a rally track when driving normally or is every time behind the wheel an opportunity to achieve perfect racing lines? “That’s the thing…I went into racing so I could stop doing stupid things on the road! Haha, but seriously, I think you need to learn that it’s not an opportunity every time you’re behind the wheel, although sometimes I forget…but you need to get used to it otherwise you’ll get into trouble and I need to be a good example to others!”

Tell us honestly, how much trust do you need to have in your co-driver and what makes your and Hugo’s partnership work so well? “The partnership with the co-driver is extremely important because he carries a big part of the job both in and out of the race. There are many things outside of the race that the public don’t see like the admin stuff, the notes on the rally stages…all of these things the co-driver takes care of to ensure we are ready for the rally. During the race he navigates me through all the stages and trust is a really big element, if I don’t trust what he is telling me, I will not be able to do anything. I trust him implicitly. Also there is the emotional support, the conversations, he becomes like a really good friend, we spend a lot of time together…he understands what I want, what I like, what I don’t…so it’s a package, its sometimes closer than a wife or a girlfriend!” 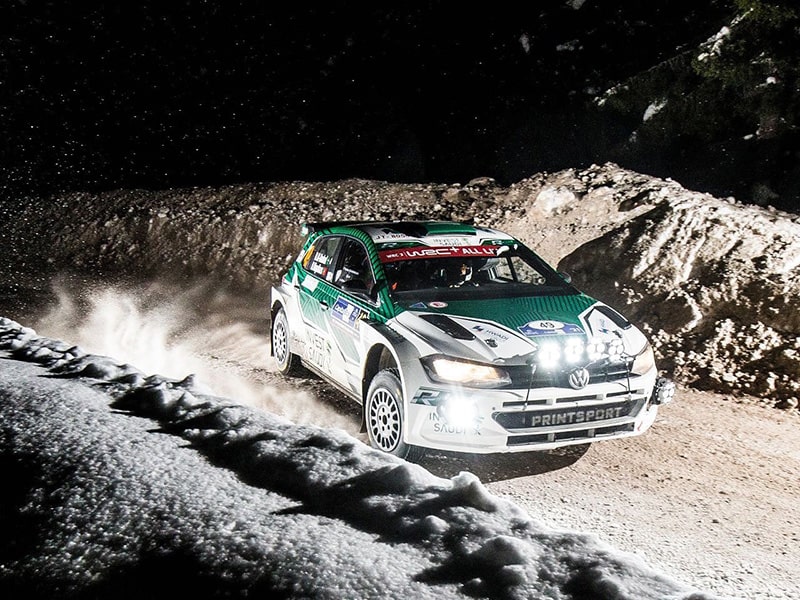 Settle this for us once and for all, what makes the bigger difference, the skill of the driver or the ability of the car? “Oooof, 100% the driver! Okay look, the car helps but we’ve seen it a lot, that some people have the worst car but if they are a crazy driver, they beat the guys with the better cars! But not on a straight…you need corners!” 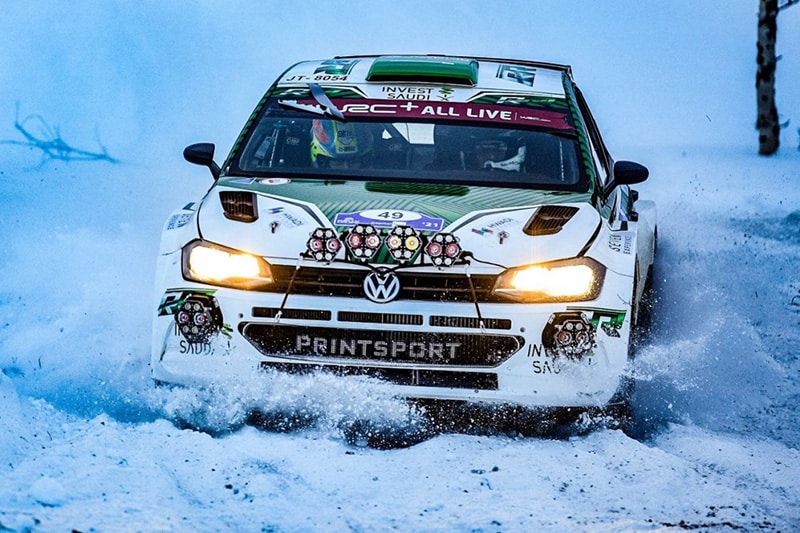